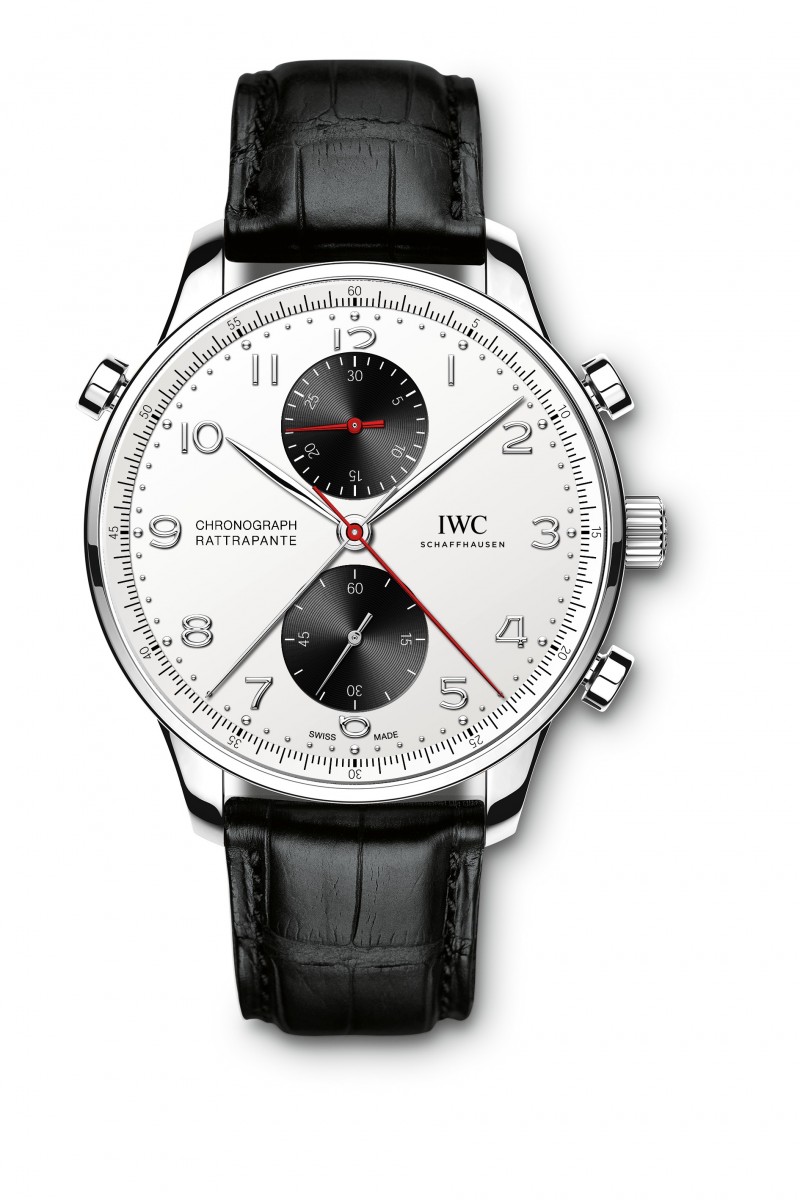 Schaffhausen / New York, 5 September, 2017 – IWC Schaffhausen is launching the Portugieser Chronograph Rattrapante Edition “Boutique Canada”. To commemorate the 150th anniversary of the Canadian Federation, this iconic double chronograph is limited to 150 pieces. The timepiece is distinguished by a third push-button for starting and stopping the split-seconds hand, making it possible to measure a second short period of time simultaneously and with down-to-the-second accuracy.

In 1867, the British colonies of Canada, Nova Scotia and New Brunswick were united into one Dominion of Canada. IWC Schaffhausen contributes to the sesquicentennial anniversary of Canadian Federation with a special edition Portugieser watch:

The Portugieser Chronograph Rattrapante Edition “Boutique Canada” (Ref. IW371220) is based on the timeless design of Portugieser watches from the 1930s. It features a double chronograph complication for simultaneously measuring two short periods of time. Available as a limited edition of only 150 pieces worldwide, it commemorates the 150th anniversary of the Canadian Federation this year. The watch has a stainless-steel case and a silver-plated dial. The totalizer at “12 o’clock” and the small hacking seconds at “6 o’clock” are black, the hands are rhodium-plated and red. A black alligator leather strap adds to the overall elegant appearance of this timepiece. The engraving on the case back depicts the maple leaf, the most recognizable symbol of Canada, appearing on the national flag and the royal coat of arms.

The split-seconds hand catches up

In addition to the capabilities of a regular chronograph, the double chronograph features a split-seconds mechanism. On starting the chronograph by pushing the button at “2 o’clock”, two centrally rotating stopwatch hands mounted on top of each other are set in motion. The additional push-button at “10 o’clock” is used to stop the upper hand, while the lower hand will continue to move until the regular stop button at “2 o’clock” is pushed. This enables two short periods of time to be measured simultaneously. When the rattrapante push-button is activated a second time, the split-seconds hand is brought into synchrony with the chronograph hand – no matter whether is has been stopped or is still moving.

The Portugieser Chronograph Rattrapante Edition “Boutique Canada” will be available in the IWC boutique in Toronto starting December 2017 for CAD 14,300. It is currently available for presale by calling the Toronto boutique at the Yorkdale Shopping Centre at +1.647.259.2844.