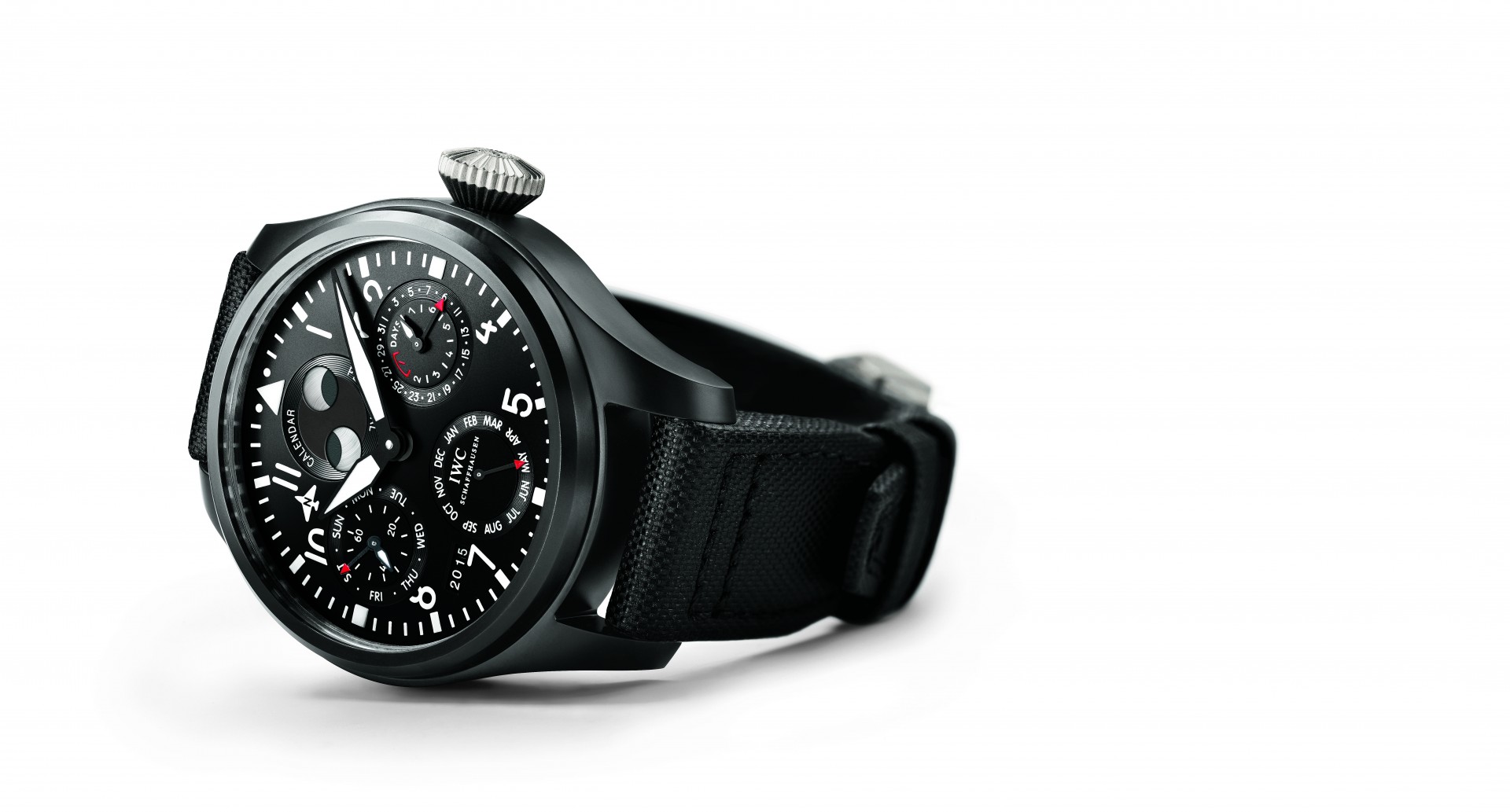 The first Pilot’s Watch - Double Chronograph made a springtime debut at the Basel Watch Fair in 1992, straight after IWC engineers had completed the project in February of that year. The green light to build a prototype was initially given by Günter Blümlein to IWC watchmaker Fred Ehrensperger, and although it was an ambitious project, Ehrensperger readily accepted the challenge. The aim was for IWC to become the first manufacturer to launch a wrist watch with a split-seconds chronograph and an automatic movement. Time for the project was extremely limited but in just three weeks – and after a series of long, sleepless nights – Ehrensperger managed to complete 15 watches to be presented at the Basel Watch Fair. The innovative design featured an extremely delicate module, which enabled the user to mechanically measure two different times simultaneously, or an unlimited number of intermediate times.

The W.W.W (or watch, wrist, waterproof) is the most well-regarded of all the British Army watches by some margin. It is possible that this is because they were the first wrist watches specially designed for general British Army service. Prior to this, civilian wrist watches, which were not always suitable for requirements, were used. IWC were one of 12 companies supplying the British Army with the W.W.W. models, and by doing so, the business gained invaluable experience of dealing with the challenging specifications of the British authorities. Some 6,000 watches were made for the British Army in total and they were supplied to the UK from May to June 1945.

The Big Pilot’s Watch was supplied to the Luftwaffe German Air Force in 1940 in an edition of 1,000 pieces. Constructed according to strict criteria for observation watches, it is the biggest wristwatch ever built by IWC, with a case diameter of 55 mm, a height of 16.5 mm, and a weight of 183 g.

From a very early stage IWC focused on the production of technically advanced watches, designed especially for aviation, and the company is a real pioneer in this field. The progress made in flying and navigation had created a growing need for equipment which offered maximum reliability under tough conditions. Ernst Jakob Homberger (1869-1955), IWC Managing Director during the 1930s, had two sons who were so passionate about aviation that they decided to manufacture the first IWC “Special Watch for Pilots” in 1936. The design included shatterproof glass, a rotating bezel with an index for recording short periods of time, an antimagnetic escapement, together with high-contrast luminescent hands and numerals. The watch was particularly robust and resistant to fluctuations in temperature within a range of -40 to +40 degrees Celsius.

In response to a product order from the British Government in 1948, IWC developed a service watch for pilots in the Royal Air Force (RAF). The technical specifications stipulated by the RAF were very strict with a special demand that the movement be protected against magnetic fields. The production of the legendary Mark 11 began in 1948 and by November 1949, the watch was being supplied to airborne personnel of the RAF and other Commonwealth nations. It remained in service until 1981. The watch features the original radium RAF dial used between 1949 and 1952, which is often referred to by collectors as the “White 12” dial.

The Mark 11, with a hand-wound 89 caliber movement, is the most famous IWC pilot’s watch, and was used by civilian and military navigators and pilots from 1948 onwards. The company had supplied watches to the British Army and Navy throughout the Second World War and, as a result, was well used to the exacting demands of the British authorities. The earliest design changed slightly in 1952, with this edition of the watch featuring a white triangle index marker at the12 o’clock position to enable pilots to discern the time at a glance. By 1963, the RAF had decided to exchange all the radium dials with tritium dials clearly marked with an encircled “T”. The Mark 11, in its different variations, completed over 40 years in service, proving its quality and reliability in even the toughest of conditions.

IWC continued to strengthen its tradition of designing aviation watches throughout the last quarter of the twentieth century. Forty eight years after the legendary Mark 11 was launched, the IWC Pilot’s Watch Chronograph (Ref. IW3740) was designed, whilst in 1994, IWC launched a Pilot’s Watch Chronograph (Ref. 3705) for modern aviation. This edition came with another top-flight feature: a zirconium oxide case. This high-tech ceramic is as hard as sapphire and virtually indestructible.

In 1998, IWC reacted to growing mobility in an increasingly globalized world with the launch of the IWC Pilot’s Watch UTC. This timepiece was synchronized with “Universal Time”, so not only could the wearer read different times and dates around the world, but they could also change the time and date by simply using the watch’s crown. Since 2003, the Pilot’s Watch UTC became part of the newly designated Spitfire Family, featuring the collection’s specific classic design codes.

Since 2003, IWC Pilot’s Watches have been available in a style that takes its name from the supremely elegant and technologically advanced Spitfire aircraft. The collection includes four different models: the Chrono-Automatic,the UTC watch with its two time zones, the classic Mark XVI and the Spitfire Midsize. The dials and hands were modified slightly and the case sizes were adapted to those of the classic models.

In 2007, the first “Top Gun” watch joined IWC Pilot’s Watch squadron. Named after the legendary accolade given to the “Strike Fighter Tactics Instructor” course of the United States Navy Fighter Weapons School, it had a masculine design with a black color scheme. In 2012, during IWC’s “Year of the Pilot’s Watches”, the Top Gun collection was established as an independent line with five new models.

For the world-famous poet and author of “The Little Prince”, Antoine de Saint-Exupéry, literature and aviation technology were two sides of the same coin. 2016’s Big Pilot’s Watch Annual Calendar Edition, “Le Petit Prince”, brings these two very different two worlds together. Three windows display the day, date, and month, with an advanced mechanism automatically taking the length of individual months into account. The back of the watch features an engraving of the Little Prince gazing at the sky with wonder. He stands on an asteroid, which is also the watch’s revolving rotor.The caliber includes a two barrel design which has enough torque to drive the three date display discs and, when fully wound, can supply enough energy for a full 7 days’ power reserve. This highly advanced watch only requires manual correction via the crown annually, at the end of February.

In 2006 a special edition of the IWC Pilot’s Chronograph commemorated French author and aviation pioneer Antoine de Saint Exupéry. Marking 75 years since his celebrated “Vol de Nuit” or “Night Flight” novel was published, the stunningly beautiful watch features a tobacco-colored dial, special protection against magnetic fields, and a case-back engraving of the book’s flying hero. Limited to 1,931 watches, 1,630 were crafted in stainless steel, 250 in rose gold,50 in white gold, and a single edition in a platinum case. The platinum watch was auctioned together with a first edition of the book in French for the benefit of the “Vol de Nuit/Vuelo Nocturno” association. Over the years that followed, IWC has launched different Pilot’s watches which also included the remarkable Saint Exupéry design.

The Top Gun design first joined IWC Pilot’s Watches collection in 2007, before establishing itself as an independent line within the family from 2012. The 2012 edition drew on the long tradition of manufacturing unusual deck watches and was elaborately equipped with a host of advanced features. These included a perpetual calendar with a four-digit year display, moon phase display, and a seven-day power reserve.

Launched in 2012, the Big Pilot’s Watch Top Gun united the clear-cut utility look of the 1940s with ultra-modern technology. Offering a more contemporary take on functionality with new materials and design elements, it featured a clear-cut dial with a striking black-and-white contrast, an impressive power reserve, and straight forward date displays.The most distinctive addition to the popular cockpit design was the small red aircraft motif on the seconds hand. It was packed with high-tech materials including the zirconium oxide ceramic case, which was hardwearing, scratch-resistant, and water-resistant to six bar. The crown was crafted in extremely rugged titanium, whilst the strap was soft and black to secure the 48 mm case comfortably to the wearer’s wrist.