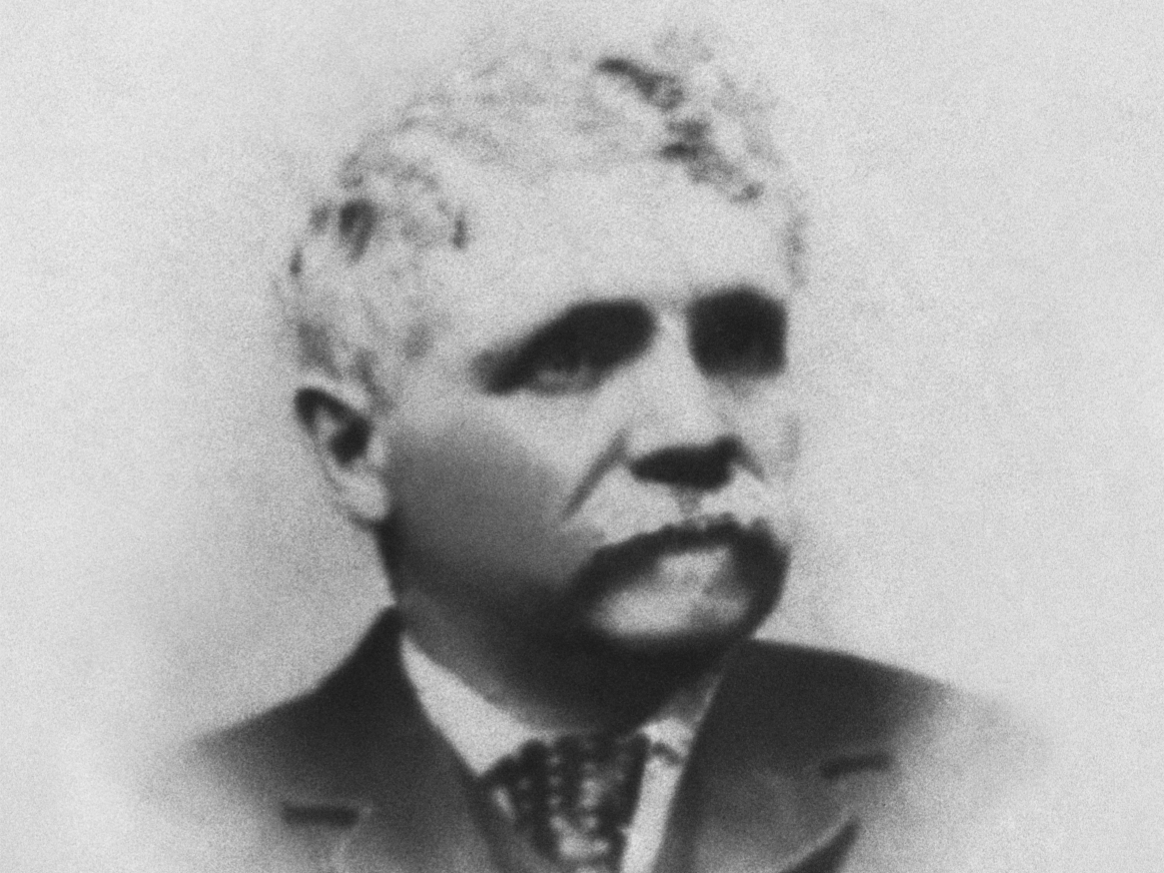 FLORENTINE ARIOSTO JONES
In 1868, 27-year-old watchmaker, Florentine Ariosto Jones, travelled from Boston to Switzerland and founded the International Watch Company in Schaffhausen. Previously with the E. Howard Watch & Clock Company, he had learned all about the modern production methods used in the American watch industry. His plan now was to combine these processes with the skill and experience of Swiss watchmakers to produce top-quality pocket watch movements for the US market. In Schaffhausen and in virtually no time, he set up the infrastructure needed to manufacture over 10,000 watch movements per year, at a time when watches were mostly made individually by home-based labourers. His industrial approach was also apparent in the Jones calibres, which feature three-quarter plates. This design concept, widely adopted in the USA, enabled simpler and more cost-efficient production of the small components. Jones was undoubtedly a visionary, but faced challenges such as rapid production growth, increasing wages, import duties and therefore missed some profitability targets. When Jones failed to meet his shareholders’ expectations, he found himself forced to return to the USA in December 1875. In 1880, a Schaffhausen industrialist, Johannes Rauschenbach- Vogel, took over the company. A genuine pioneer, F. A. Jones was the first person to succeed in transferring modern production methods from the USA to Switzerland. He never returned to the watchmaking industry and died on 18 October 1916 near Boston. Nevertheless, his legacy lived on in Schaffhausen: 2 years before his death, annual production had already reached 25,000 units.


ERNST JAKOB HOMBERGER
Following the death of predecessor Johannes Rauschenbach- Schenk, Ernst Jakob Homberger took over at the helm of IWC in 1905. Homberger had joined the family through his marriage to Rauschenbach’s youngest daughter. At that time, his brother-in-law, the famous psychiatrist Carl Gustav Jung, was also active in the company. In 1929, Homberger bought Jung’s shares and became sole proprietor of the company. A strictly old-school proprietor, Homberger successfully steered IWC through the difficult years of the economic crisis in the 1930s. Inspired by his two aviation-enthusiast sons, Hans Ernst and Rudolf, Homberger launched the Special Pilot’s Watch in 1936 beginning the era of Pilot’s Watches that continues to live on today within IWC. It was under his management that the first Portugieser was made in 1939. Homberger also demonstrated far-sightedness on operational topics: in 1944, he appointed Albert Pellaton, a recognised authority on technical questions and production processes, as technical director at IWC. In 1955, the company unveiled the first Ingenieur. A soft-iron cage effectively protected the movement against magnetic fields and, for the first time ever, Pellaton’s highly efficient automatic winding system used rotor movements in both directions to wind the mainspring. Ernst Jakob Homberger passed away the same year. His son, Hans Ernst, took charge at IWC as the last private owner.


GÜNTER BLÜMLEIN
When low-cost quartz watches from Japan flooded the market, large areas of the Swiss watch industry plunged into a deep crisis. In 1978, a German company by the name of VDO Adolf Schindling AG took over IWC. The new owners brought Günter Blümlein on board, an engineer by training, who was also skilled at marketing. He fully endorsed the company’s heritage and proud tradition, and ushered in a renaissance of high-quality mechanics. During this period, Kurt Klaus developed the famed perpetual calendar, which had its debut in the Da Vinci family in 1985. In 1990, IWC definitively scaled the heights of Haute Horlogerie with the Grande Complication: among other things, the watch featured the legendary minute repeater designed by Dominique Renaud and Giulio Papi. To celebrate IWC’s 125th anniversary in 1993, “Il Destriero Scafusia” was launched, the most complicated watch ever built in Schaffhausen. In addition, Blümlein drove the development and design of in-house movements, such as the 50000-calibre family with Pellaton winding and a seven-day power reserve. Under his leadership, IWC also established the materials expertise that has remained unique to this day. In 1980, the IWC Porsche Design Titanium Chronograph became the world’s first wristwatch with a case made from titanium. The Da Vinci Perpetual Calendar, which followed in 1986, was the first watch in a case made of black zirconium oxide ceramic. In February 2000, Richemont acquired IWC, Jaeger-LeCoultre and A. Lange & Söhne. There would have been a role for Günter Blümlein in the Group, but in 2001, after a short but serious illness, he passed away unexpectedly at the young age of 58.


GEORGES KERN
Georges Kern joined Richemont in 2000 and, as the Group’s youngest-ever CEO, took charge of IWC in 2002 at the age of just 36. Over the following years, he developed IWC from a niche manufacturer known mainly in Europe to a global luxury brand. Kern streamlined the product portfolio and, with six families – Pilot’s Watches, Portugieser, Portofino, Ingenieur, Aquatimer and Da Vinci – establishing clear positioning. Georges Kern was the architect of IWC’s transformation from a watchmaker to a modern luxury brand. Very early on, he understood the relevance of evocative storytelling and brand experience as a key component of luxury branding and created rich content to increase IWC’s appeal across a wide range of audiences. He distilled the essence of each line into a structured, emotional world of experience. He established a link, for instance, between the Pilot’s Watches and man’s dream of flying. Another example is the collaboration he initiated with the heirs of the French writer and pilot, Antoine de Saint-Exupéry. The special editions created in honour of Saint-Exupéry’s world-famous story, “The Little Prince”, rapidly acquired iconic status with their midnight blue dials. And IWC’s partnerships with the Laureus Sport for Good Foundation, the Charles Darwin Foundation, the Cousteau Society and leading film festivals consistently developed this storytelling approach. The stands created for the Salon International de la Haute Horlogerie (SIHH) in Geneva displayed the various product worlds in spectacular fashion. It was also under Kern that IWC developed its retail presence and expanded its network of authorised retailers, the work of designer and interior architect Christoph Grainger-Herr, who succeeded Georges Kern as CEO of IWC in 2017.


ALBERT PELLATON
Albert Pellaton was born in 1898 in Travers in the western part of Switzerland. His grandfather and uncle were already talented watchmakers, so it came as no surprise that young Albert chose the same career. After completing his training, he worked for various Swiss watch manufacturers, before he took up his job as a Technical Director at IWC in 1944. His first stroke of genius came in 1946 with the development of the hand-wound 89 calibre. Later, Pellaton designed the first IWC-manufactured automatic movement – calibre 85 – with a highly efficient pawl-winding system that uses revolutions of the rotor in both directions to wind the mainspring. Many automatic calibres from Schaffhausen are still based on this visionary invention. Under Pellaton‘s guidance, IWC not only developed and perfected countless new watches, but also optimised production processes. After 22 years with IWC, Pellaton retired in 1966. He died in 1976. His ideas and visions, however, continue to be an inspiration for every young watchmaker.


KURT KLAUS
Kurt Klaus was born in 1934 in St. Gallen. As a teenager, he was interested in technology and mechanics, and so he decided to become a watchmaker. He started his career at IWC in 1957. Even though Klaus is most famous for his perpetual calendar, there has hardly been a development during his time that he did not make an important contribution to. During the 1970s, this mechanical visionarydeveloped a calendar with a moon phase display for a Lépine pocket watch. After the launch of the iconic Da Vinci Perpetual Calendar in 1985, the Grande Complication, the Il Destriereo Scafusia, the 5000 automatic calibre, the split-seconds mechanism, the world time module and the mechanical depth gauge all carried his signature. Klaus also helped to adapt the perpetual calendar to the Portugieser and contributed to the development of the perpetual calendar with a digital date and month display. He retired in 1999. To this day, the charming Swiss is regarded as one of the most popular personalities in the watch industry.


HANNES PANTLI
Hannes Pantli was born in 1942 in Dübendorf. In 1972, the young visionary started at IWC. He became Sales Representative for the Benelux and Scandinavia region and later also for Switzerland. When working as a Sales Director for Europe & the Middle East, Pantli recognized the strong and world wide demand for women’s and jewellery watches. With the sale of such models, IWC successfully navigated through the crisis in the watch industry. At just 34 years of age, Pantli was promoted to the executive board and became responsible for marketing and sales. He played a major role in securing VDO as an investor for the manufacture, but also in getting Günter Blümlein on board. Later, he oversaw the restructuring of the product portfolio. He developed the sporty-elegant SL Collection and initiated the collaboration with Porsche Design. With the Portofino, Pantli created one of the most successful watch families from Schaffhausen. Since retiring in 2002, he is a member of the IWC Board of Directors.