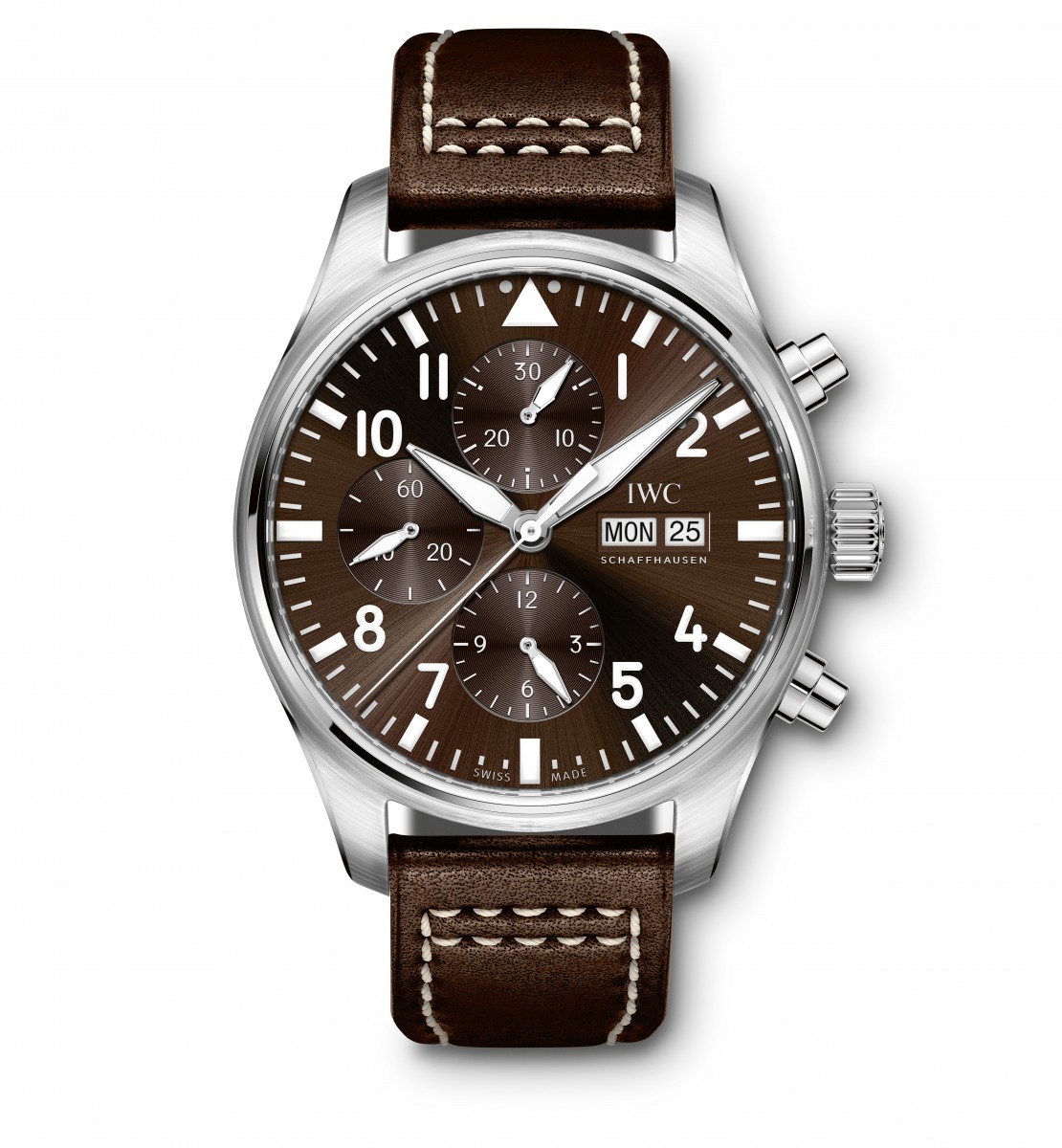 Schaffhausen, 18 May 2017 – A tobacco brown dial and a brown calfskin strap with decorative white stitching: these are the most important distinguishing features of the special editions developed by IWC Schaffhausen to honour the French pilot and author Antoine de Saint-Exupéry. Now, two classics from the Pilot’s Watch family are available in the distinctive Saint Exupéry look for the first time: the Pilot’s Watch Chronograph and the Pilot’s Watch Mark XVIII. At the same time, IWC is also unveiling a new model of the Pilot’s Watch Automatic 36 with a brown dial.

Following the launch of the new Da Vinci and Ingenieur collections, IWC Schaffhausen is already unveiling the next innovations in the Pilot’s Watch family. The Pilot’s Watch Chronograph Edition “Antoine de Saint Exupéry” (Ref. IW377713) with date and day display precisely handles single and aggregate stop times of up to 12 hours. The self-winding system generates a power reserve of 44 hours – so it is even self-sufficient enough for long-haul flights. The numerals and hands on the clearly structured dial feature luminous coatings to ensure good legibility, even at night-time. And with the second innovation, the Pilot’s Watch Mark XVIII Edition “Antoine de Saint Exupéry” (Ref. IW327003), the Saint Exupéry family is gaining another new member in the form of the Pilot’s Watch Mark XVIII.

Both watches feature the characteristic tobacco brown dial and are fitted with a brown calfskin strap by Santoni with decorative white stitching. This design is inspired by the typical overalls worn by pilots in Saint-Exupéry’s era. The timepieces also feature an engraving of a Lightning P-38 on the case back. It was in this particular model of aircraft that Saint-Exupéry took off on a reconnaissance flight from which he never returned.

The Pilot’s Watch Automatic 36 was specially developed for women and watch lovers with slender wrists. With a case measuring just 36 millimetres in diameter, it is the smallest watch in the IWC portfolio. And now with the Reference IW324009, there’s a new model on the scene with a brown dial and brown alligator leather strap. Thus, the mini collection now includes six elegant and compact sports watches in the characteristic IWC Pilot’s Watch design.

All three watches feature IWC’s tried-and-tested technology for pilot’s watches: the soft-iron inner case effectively protects the movement against the influence of magnetic fields, and the sapphire glass is specially designed to be protected against sudden drops in pressure in the cockpit. The new models are available now in IWC boutiques and from authorised IWC retailers.