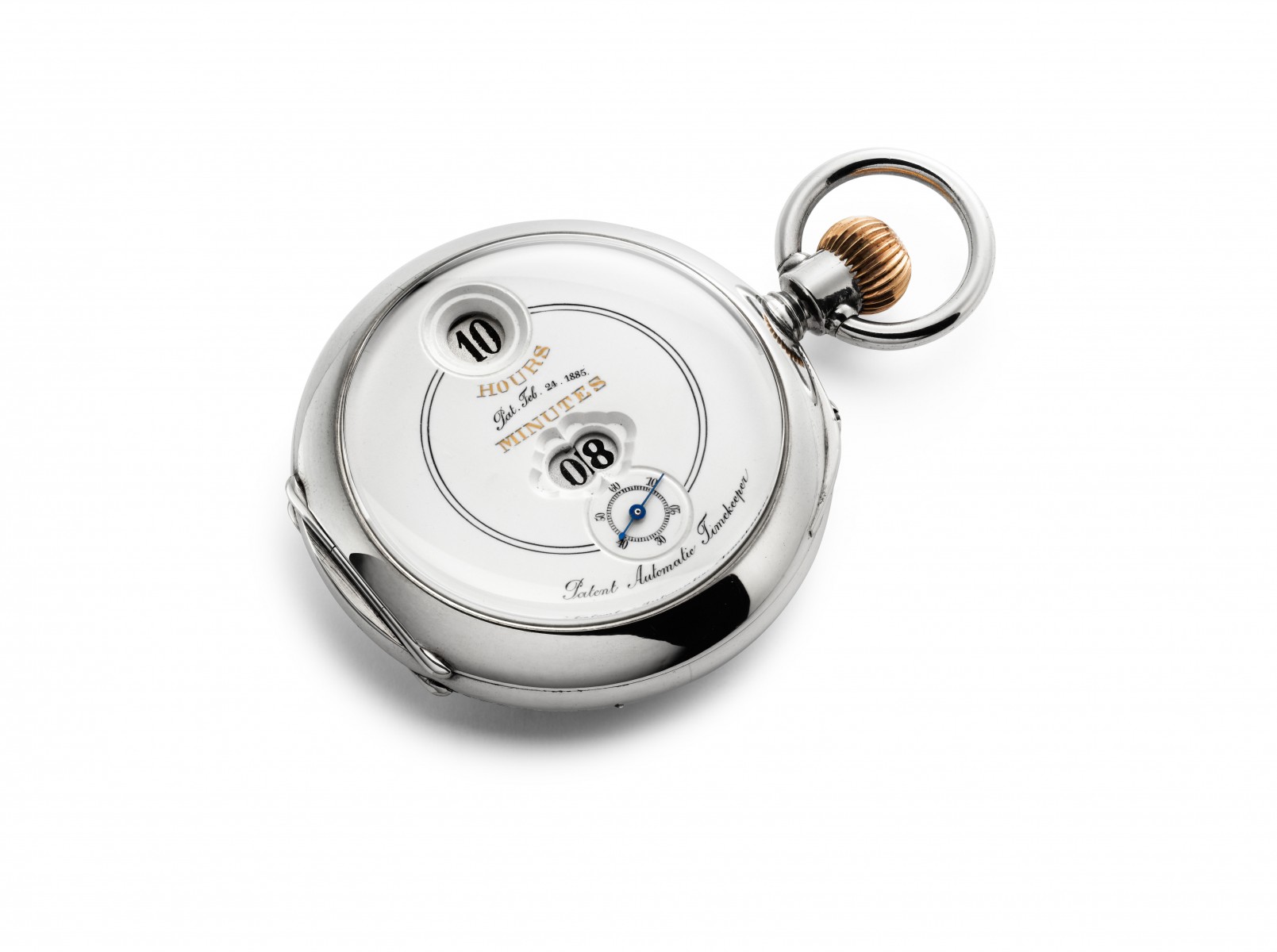 IWC_Savonnette Pocket Watch Pallweber_1886
In the summer of 1884, IWC ushered in the digital era, and the first pocket watches with jumping numerals left the workshops. They were based on the Pallweber system developed by Salzburg-based watchmaker, Josef Pallweber, and showed the hours and minutes in large numerals on rotating discs. Johannes Rauschenbach- Schenk, head of IWC at the time, was fascinated by this modern approach to displaying the time and secured the patents for the handless watches. However, since toothed cogs were responsible for the energy-intensive job of advancing the display discs, the power reserve of the Pallweber pocket watches was relatively limited. Although IWC succeeded in significantly improving the design, the Pallweber pocket watches, of which around 20,000 were produced in Schaffhausen, were a commercial success for only a limited period of time. Production was discontinued in 1890. It was only almost 100 years later, with the advent of quartz watches, that digital time display reappeared.

From the Jones calibres to the Da Vinci with Kurt Klaus’s perpetual calendar and the Portugieser Sidérale Scafusia: ten products have determined IWC’s heritage and built its global success.

JONES CALIBRE
First-class pocket watch movements of consistent quality for the US market, made in Switzerland with a high level of industrialisation: it was with this visionary idea in mind that Florentine Ariosto Jones founded the International Watch Company in 1868. The first Jones calibres were produced around 1870. They were based on a platform structure and assigned to a specific “pattern”, the highest quality level represented by “Pattern H”. Unlike conventional Swiss movements of the time, they were not fitted with finger bridges, but with three-quarter plates. This type of construction, widely adopted in the USA, gave them greater stability and simplified the production of small parts. Other notable features included the wolf’s tooth winding on the cogs and the elaborate finishing on the plates and bridges. The oscillations of the balance in all these calibres were regulated using an elongated index, also known later as the “F. A. Jones arrow”.

PALLWEBER POCKET WATCHES
In the summer of 1884, IWC ushered in the digital era, and the first pocket watches with jumping numerals left the workshops. They were based on the Pallweber system developed by Salzburg-based watchmaker, Josef Pallweber, and showed the hours and minutes in large numerals on rotating discs. Johannes Rauschenbach- Schenk, head of IWC at the time, was fascinated by this modern approach to displaying the time and secured the patents for the handless watches. However, since toothed cogs were responsible for the energy-intensive job of advancing the display discs, the power reserve of the Pallweber pocket watches was relatively limited. Although IWC succeeded in significantly improving the design, the Pallweber pocket watches, of which around 20,000 were produced in Schaffhausen, were a commercial success for only a limited period of time. Production was discontinued in 1890. It was only almost 100 years later, with the advent of quartz watches, that digital time display reappeared.

SPECIAL PILOT’S WATCH
Aviation was still in its infancy when General Director Ernst Jakob Homberger – inspired by his two aviation-enthusiast sons, Hans Ernst and Rudolf – launched the Special Pilot’s Watch, Reference IW436, in 1936. In the pioneering age of flying, most pilots were still using pocket watches. A wristwatch developed specially for pilots was a real innovation. Designed for use in the cockpit, the timepiece was driven by the 83 calibre with an antimagnetic escapement. The watch functioned reliably at temperatures between minus 40 and plus 40 degrees Celsius, which was vitally important in the open or unheated cockpits of the era. Flight time was set using a rotating bezel. The black dial and the large luminescent numerals and hands were particularly striking features. The clear instrument design not only made the dial easy to read when visibility was difficult, but it has also remained a central design feature of Pilot’s Watches from Schaffhausen to this very day.

PORTUGIESER
In 1939, two businessmen from Portugal placed an order with IWC for a series of large wristwatches that were to run as precisely as a marine chronometer. The captains and officers of the Portuguese merchant navy wanted a “seriously big watch” to wear on their wrists. Schaffhausen’s design engineers decided to put the men’s pocket watch 74 calibre into a wristwatch case. The hunter movement was particularly well-suited for this purpose because the small seconds was at an angle of 90 degrees relative to the crown. On top of that, it had an extremely accurate rate. The first Portugieser, Reference IW325, had a case diameter of 41.5 millimetres and far exceeded the dimensions of conventional wristwatches of the era. The railway-track-style chapter ring, the Arabic numerals and the slender feuille hands defined the timeless elegance of the IWC Portugieser.

THE 85 CALIBRE AND INGENIEUR
In 1950, IWC launched its first in-house automatic movement. The man behind the development of the 85 calibre was the technical director at the time, Albert Pellaton. The most important feature in the mechanism was the highly efficient automatic winding. Unlike most other similar systems of the time, it used the movement of the rotor in both directions to wind the mainspring. To achieve this, an eccentrically mounted disc transformed the revolutions into oscillating movements on a rocking bar. Two pawls firmly connected to the rocking bar alternately pull on the winding wheel or slide over it. In this way, every movement of the rotor – no matter how small – can be used to increase the tension in the spring. The 85 calibre with Pellaton winding was enthusiastically received by customers and watch industry specialists and subsequently also used in the first Ingenieur, Reference IW666, of 1955. And because an increasing number of electronic devices in the household generated magnetic fields, the Ingenieur also featured a soft-iron case that effectively protected the movement against their influence.

AQUATIMER
The 1960s saw the rise of scuba diving as a popular sport. In response, IWC unveiled its first diver’s watch, the Aquatimer, Reference IW812 AD, at the Basel Watch Show in 1967. Powered by the legendary 8541 calibre, the watch was water-resistant to a depth of 200 metres. Instead of a classic external bezel for setting the dive time, the watch featured a rotating bezel under the glass that was operated using a second crown. The advantage of this design lay in the fact that the bezel was inside the watch and therefore did not impact the water-resistance of the case. The black dial with its large numerals and luminescent hands guaranteed optimum legibility, even at great depths and in conditions of poor visibility. It thus enabled divers to keep constant track of their dive time.

IWC PORSCHE DESIGN TITANIUM CHRONOGRAPH
Titanium is extremely robust and about a third lighter than steel. In addition, it is skin-friendly and has a unique matte grey surface. But the metal is also challenging to machine. For many years, therefore, titanium was considered unsuitable for watch cases. Nevertheless, IWC accepted the challenge and, as a result of an intensive exchange with aerospace specialists, acquired the expertise needed to machine titanium. In 1980, the company produced the IWC Porsche Design Titanium Chronograph, Reference IW3700, the world’s first wristwatch in a titanium case. Two years later, this attractive material also featured in the Ocean 2000 diver’s watch, which was pressure-resistant to 200 bar and also the work of German industrial designer, Ferdinand A. Porsche. Over the next few years, IWC introduced a number of other innovative case materials, such as black ceramic, and established its material innovation leadership in the Swiss watch industry.

DA VINCI PERPETUAL CALENDAR
Probably no other watch has left its mark on the history of IWC like the Da Vinci featuring Kurt Klaus’s perpetual calendar. With the quartz crisis at its height, IWC’s head watchmaker pursued designing a mechanical perpetual calendar. Comprising 82 individual components in a design of ingenious simplicity, the calendar module, combined with a chronograph, made its debut in 1985 in the Da Vinci family in the form of Reference IW3750. The calendar automatically recognises the differing lengths of the months as well as leap years and will require no adjustment until 2100. If the watch has not been worn for some time, all the displays can be adjusted simply by turning the crown, an elegant and unique feature. Apart from its user-friendliness, the calendar’s four-digit year display was another novel feature, while the highly precise moon phase display will deviate from the actual moon cycle by a single day after 122 years.

BIG PILOT’S WATCH
In 2002, inspired by the Pilot’s Watch Calibre 52 T.S.C., IWC launched the Big Pilot’s Watch, Reference IW5002, with an imposing diameter of 46 millimetres, and re-established the design of a mid-spec instrument watch in the luxury watch industry. The timepiece has all the typical design cues of the historic original, for example its matte black dial with a triangular index at “12 o’clock” together with large, luminescent numerals and hands for extra legibility. The big, chunky crown and extra long straps hark back to the early days of flying when pilots still wore quilted flying suits and thick gloves, which otherwise made setting and winding difficult when synchronising watches before each mission. The necessary power was supplied by IWC’s largest automatic movement, the 5011 calibre, with Pellaton winding and a seven-day power reserve. After 168 hours, a specially designed mechanism brings it to a standstill. It means that the watch never runs when torque diminishes in the mainspring as it winds down. The power reserve display at “3 o’clock” keeps the wearer informed about the remaining power reserve.

PORTUGIESER SIDÉRALE SCAFUSIA
The Portugieser Sidérale Scafusia, Reference IW5041, is the most complicated mechanical watch ever made by IWC. The company’s engineers spent 10 years on the development and design of this timepiece, which has a dial in the style of the classic Portugieser. The patented constant-force tourbillon disconnects the escapement from the direct flow of power produced by the main spring. The delivery of absolutely even impulses of power to the balance ensures constant amplitude and thus a very high level of accuracy. Apart from solar time, the watch also displays sidereal time, which deviates from normal time by around 4 minutes daily and is widely used in astronomy. The star chart on the back is customised to each owner’s preferred location to show the correct appearance of the night sky throughout the year from that vantage point. The displays are complemented by a sunrise/sunset indication accounting for daylight savings (summer) time.