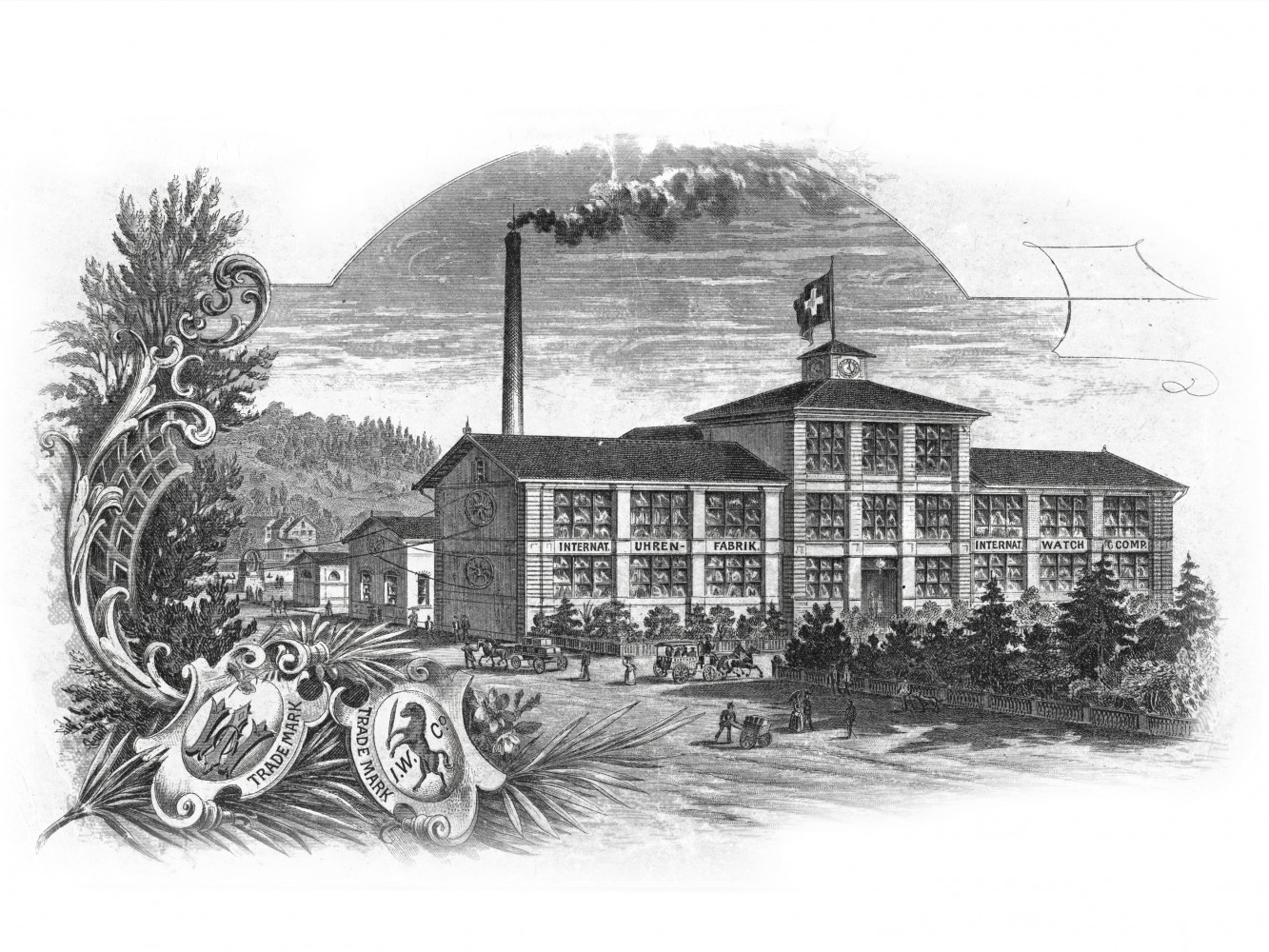 IWC_History_HQ_1870
IWC Headquarters in Schaffhausen, built between Summer 1874 and March 1875.

IWC’s story begins with the spirit of endeavour and a bold, entrepreneurial idea: in 1868, American watchmaker Florentine Ariosto Jones founded the International Watch Company in Schaffhausen. With the aid of eminently qualified Swiss professionals, state-of-the-art machine technology and hydropower from the Rhine, his aim was to produce top-quality pocket watch movements for the US market.

Within a short time span, Jones was able to set up a strongly industrialised manufacturing infrastructure in Schaffhausen, geared for the production of over 10,000 movements per year. The Jones calibres were based on a platform strategy and, in the early 1870s, “Pattern H” represented the highest quality level. The finished watches were exported to the USA and delivered to local retailers. Jones, however, was unable to meet his shareholders’ high expectations, and in 1875 was forced to return to America. IWC’s shareholders brought in another American, watch manager Frederick Francis Seeland, to take over where Jones had left off.

In 1880, the Rauschenbachs, a Schaffhausen family of industrialists, took over the entire company and started selling its watches worldwide. New management consistently improved the manufacturing process and the design of new watch movements. Under Johannes Rauschenbach- Schenk, in 1884, IWC started producing the first Pallweber pocket watches with digital displays for the hours and minutes. During the first half of the 1890s, the company manufactured 20,000 of the handless watches. And records show that the first wristwatches from Schaffhausen went on sale as early as 1899. The company’s watchmakers housed the 64-calibre ladies’ pocket watch movement in a dainty case fitted with lugs for the strap.

Following the death of Johannes Rauschenbach-Schenk, Ernst Jakob Homberger took over at the helm of IWC in 1905. Homberger had joined the family through his marriage to Rauschenbach’s youngest daughter. At that time his brother-in-law, the famous psychiatrist Carl Gustav Jung, was also active in the company. In 1929, Homberger bought Jung’s shares and became sole proprietor of the company. A strictly old-school proprietor, Homberger successfully steered IWC through the difficult years of the economic crisis in the 1930s. It was a demanding task that he accomplished, among other things, by implementing severe measures that affected the workforce and introducing a smart, forward-looking model policy.

Under his management, two watch families appeared that have long since achieved iconic status. In 1936, inspired by his aviation-enthusiast sons, Homberger launched the Special Pilot’s Watch: it established a tradition that has been maintained to this day. An order from two Portuguese importers for a series of large wristwatches with extremely precise pocket watch calibres marked the birth of the Portugieser watch.

Homberger was also far-sighted when it came to entrepreneurial issues. In 1944, he appointed Albert Pellaton, a recognised authority on technical questions and production processes, as technical director at IWC. Pellaton was the driving force behind the development of the com pany’s first automatic movement. It had a highly efficient automatic winding system that used the tiniest movement of the rotor in either direction to wind the mainspring. The 85 calibre debuted in 1955 in the first Ingenieur, which also featured a soft-iron cage to protect the movement against magnetic fields.

That same year, Ernst Jakob Homberger passed away and his son, Hans Ernst, took charge as the head of IWC. In 1967, under his management, the company unveiled the Aquatimer and established a tradition for elegant sports watches. The watch was water-resistant to a depth of 200 metres and had an internal rotating bezel used to set dive times. 1967 also saw the launch of the Yacht Club Automatic, a quality watch that took everything in its stride. IWC also played a significant role in the development of the first Swiss quartz movement. In 1969, the Beta 21 powered the first Da Vinci, housed in an eye-catching hexagonal gold case.

However, in the mid-1970s, the high price of gold, a strong Swiss franc and the emergence of low-priced quartz watches put the Swiss watch industry under enormous pressure. In 1978, IWC was acquired by a German instrument manufacturer, VDO Adolf Schindling AG. The new owners brought Günter Blümlein on board, a qualified engineer who was also well versed in distribution and marketing. He recognised the potential of high-quality mechanical movements and encouraged head watchmaker Kurt Klaus to develop a mechanical perpetual calendar. In 1985, the Da Vinci Perpetual Calendar premiered in Basel. The calendar module requires virtually no adjustment before 2499 and can be set and adjusted simply by turning the crown. In 1990, with the Grande Complication, IWC rises to the top of Haute Horlogerie. To celebrate IWC’s 125th anniversary in 1993 came “Il Destriero Scafusia”, at that time the most complicated watch in the world.

Under Blümlein, IWC not only returned to mechanical watchmaking but also established an expertise of materials that has remained unique to this day. In 1980 came the first titanium wristwatch, which was followed in 1986 by the first watch in a black zirconium oxide ceramic case. Collaboration with industrial designer Ferdinand A. Porsche likewise resulted in a series of special timepieces. The first wristwatch with an integrated compass and the Ocean 2000, water-resistant to 2,000 metres, is still remembered to this day.

At the start of the new millennium, IWC was taken over by Richemont. After Günter Blümlein’s unexpected passing, Georges Kern was appointed CEO at IWC. In 2002, the legendary Big Pilot’s Watch, measuring 46 millimetres in diameter, was unveiled. In 2003, a Portugieser with a perpetual calendar and double moon display for both hemispheres appeared. Since then, IWC has presented revamped collections of its six watch families every year at the Salon International de la Haute Horlo gerie (SIHH) in Geneva. IWC has expanded rapidly in the new millennium and developed into a luxury watch brand known throughout the world.

The company continues to push forward with technical innovations such as the digital perpetual calendar, the IWC SafeDive system designed to set dive times safely, the new material Ceratanium® and a practical annual calendar. In addition, the company has introduced midsize models to the Portofino and Pilot’s Watch collections as well as ladies’ models in the Da Vinci family. The watchmaking company has been under the leadership of its new CEO, Christoph Grainger-Herr, since 2017. To mark its 150th anniversary, IWC is unveiling a Jubilee collection inspired by iconic models from its history, such as the Pallweber pocket watches or the first Portugieser. The elaborate lacquering technique used to colour the dials white and blue seems set to establish yet another design trend.

With a clear focus on technology and development, the Swiss watch manufacturer IWC Schaffhausen hasbeen producing timepieces of lasting value since 1868. The company has gained an international reputation based on a passion for innovative solutions and technical ingenuity. One of the world’s leading brands in the luxury watch segment, IWC crafts masterpieces of Haute Horlogerie at their finest, combining supreme precision with exclusive design. As an ecologically and socially responsible company, IWC is committed to sustainable production, supports institutions around the globe in their work with children and young people, and maintains partnerships with organisations dedicated to environmental protection.