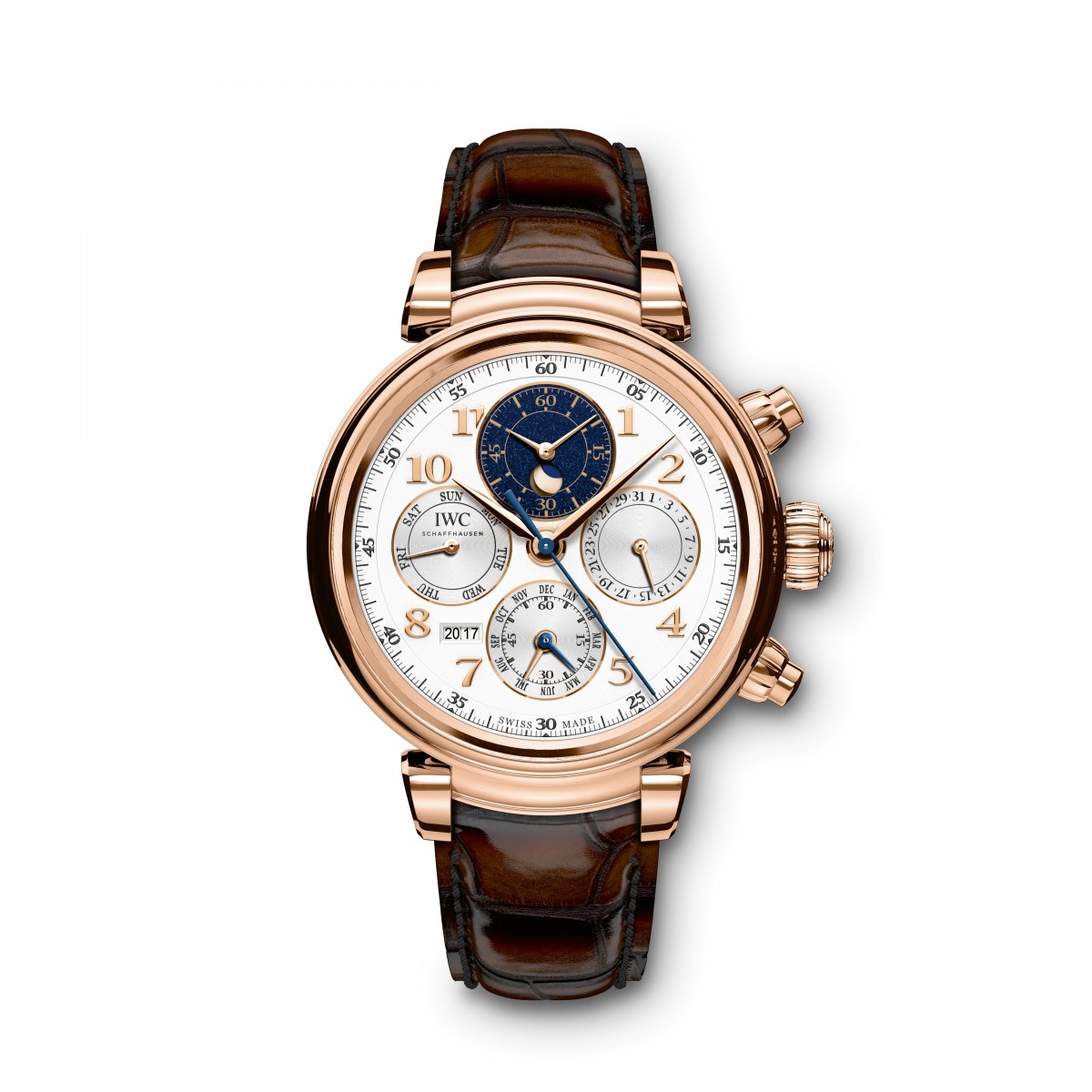 RENDEZVOUS BETWEEN MOON AND CHRONOGRAPH

The Da Vinci Perpetual Calendar Chronograph is the brand’s first watch to combine the hour and minute counters with the moon phase in a single subdial. Achieving this called for a development of the IWC-manufactured 89630 calibre. A silver-plated or gold-plated disc depicts the full moon in all its glory. At the same time, the rounded, dark blue section of the disc – representing the earth’s shadow – rotates to show the waxing or waning moon. With white gold particles sprinkled across the dark blue background, the subdial has the appearance of a star-studded night sky.

The Da Vinci Perpetual Calendar Chronograph (Ref. IW392101/IW392103) is the first model in IWC’s history to combine a chronograph from the 89000 calibre family with the perpetual calendar’s moon phase display in a subdial at “12 o’clock”. To achieve this, both the moon and the shadow of the earth are depicted on a single disc and rotate beneath an aperture in the lower part of the subdial. Together with the other three displays, this new function creates a harmonious unit on the dial of the 43-millimetre watch. The Da Vinci Perpetual Calendar Chronograph is available in two versions: 18-caratred gold and stainless steel.

“Poor is the pupil who does not surpass his master”, Leonardo da Vinci supposedly said to the man who taught him his craft. These words were also at the back of the minds of IWC’s engineers as they set about redeveloping the perpetual calendar created by IWC master watchmakerand inventor Kurt Klaus. While creating the 89630 calibre, IWC’s present-day master watchmakers constantly referred back to the old design blueprints that were their source of inspiration. But there was a significant challenge, as the moon phase in the IWC-manufactured 52610 calibre normally used for the perpetual calendar is located at “12 o’clock”. If the chronograph’s hour and minute counters were to be placed there, the hands would go straight through the centreof the moon phase disc. The 89360 chronograph calibre, on the other hand, had no room for a moon phase. As a result, the engineers designed the 89630 calibre, combining the dual counters of the chronograph with the moon phase mechanism and displaying them on a single subdial.

A MODERN TIMEPIECE WITH A BALANCED DESIGN

With its 43-millimetre case diameter and case height of 15.5 millimetres, the design of the Da Vinci Perpetual CalendarChronograph is impressive yet carefully balanced. The crown and the two push-buttons are cylindrical and no longer as round as those of the Da Vinci Perpetual Calendarof 1985. Combined with the large lugs of the moving horns, they create an impression of overall harmony. Despite the many displays, the dial remains clear and uncluttered because the designers chose dark blue as the colour for the chronograph moon phase totalizer at “12 o’clock”. This firmly distinguishes it from the dial and three subdials of the red gold version (Ref. IW392101) and the stainless-steel model (Ref. IW392103), which are silver-plated and slate-coloured, respectively.

In the red gold model, the case, horns, crown and push-buttons are all made of solid 18-carat red gold. A gold folding clasp holds the dark brown alligator leather strap by Santoni. In the stainless-steel version with its black alligator leather strap, the slate-coloured counters are equipped with rhodium-plated facets that once again emphasize the circle as an important design element. A glance through the transparent sapphire-glass back cover reveals the sophisticated design of the movement, which has blued screws, a red gold rotor and various types of decorative polishing on the bridges. The IWC-manufactured 89630 chronograph calibre with an automatic double-pawl winding system features a 68-hour power reserve.

ELEGANT SOLUTION FOR THE CHRONOGRAPH DISPLAY

For the chronograph, the designers likewise made no concessions. The hour and minute counters are combined in a totalizer at “12 o’clock”, which enables stopped times to be read off as if they were the time of day. This is a significantly more elegant form of aggregate timing than two separate counters. The blue central chronograph hand shows stopped times to an accuracy of one-eighth of a second. The chronograph has two push-buttons,which are used to start, stop and reset the hands, as well as for the flyback function. The movement itself is designed in such a way that the stopwatch can run continuously without diminishing the 68-hour power reserve.

The perpetual calendar works with the utmost precision: in 577.5 years, the display will diverge by just one day from the moon’s actual course. The perpetual calendar displays the date, month and day of the week on three subdials of the same colour at “3”, “6” and “9 o’clock”, respectively. A small window in the bottom left-hand section of the dial reveals the four-digit year display. Mechanically programmed, the calendar takes into account the different length of the months and even the leap years. Nevertheless, every 100 years (2100, 2200, etc.) a leap day normally due is omitted, which means that a watchmaker will have to advance the calendar manually on 1 March. In 2300, another intervention will be necessary when the current century slide with the figures 20, 21 and 22 will need to be replaced with a new one for the years 2300 to 2599.

* IWC Schaffhausen is not the owner of the Glucydur® trademark.

RENDEZVOUS BETWEEN MOON AND CHRONOGRAPH